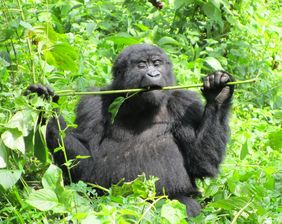 All animals - including humans - must eat to survive. The energy derived from food is necessary to sustain basic metabolic and muscle functions, growth, repair and reproduction. However, food, at least in the wild, is a limited resource - there is not always enough to go around. Competition for food can be a major cost for animals living in groups, which must often compete directly with each other for the same limited resources.

Socioecological models propose that there is a strong link between certain food resource characteristics (e.g. distribution, size and quality), the manner in which females compete for food, and the resulting pattern of social relationships in animal societies. These models seek to link ecology to social behaviour and the very structure of animal societies, and have been relatively successful at explaining the rich diversity of primate societies in particular (Schülke & Ostner 2012). Specifically, the models aim to predict how ecological conditions influence the size of social groups, the sex ratio, and social interactions including dominance, aggression, and affiliation.

Briefly, when preferred food resources are distributed in such a way that one or a few individuals in a group are able to monopolize or control access to them, more powerful individuals gain a greater share of these limited resources at the expense of weaker individuals. More dominant individuals (individuals with a higher ranking in the social hierarchy) often use aggression to gain greater access to resources over weaker lower-ranking ones. This leads to higher-ranking individuals having a more favourable energy balance (defined as energy intake or the energy derived from food minus energy expenditure) than lower-ranking individuals, typically with a positive impact on their reproductive success (number of surviving offspring).

However, this theoretical body of work is not without its problems: the models in question have recently attracted criticism, and their usefulness is currently disputed (Koenig & Borries 2009; Clutton-Brock & Janson 2012). One of the main difficulties in evaluating these models is that very few studies have actually measured the energetic consequences of feeding competition. Moreover, the precise factors that determine whether a food can be monopolized or controlled remain elusive (Koenig & Borries 2006; Schülke & Ostner 2012). Recent reviews have suggested that in order to fully understand feeding competition in a species, studies need to examine the extent to which the access to foods can be controlled and the nature of the resulting competition, and relate these aspects to energetic or reproductive consequences.

Gorillas are an interesting species in which to study feeding competition, as they live in a wide range of ecologically distinct habitats, providing ideal conditions to examine how variations in ecology give rise to variations in behaviour. The two populations of mountain gorillas (Virunga Massif and Bwindi) predominantly feed on herbaceous vegetation (fibrous foods), which is abundantly available. Accordingly, individuals are not expected to be able to control access to these food resources. However, in contrast to the Virunga mountain gorillas, Bwindi mountain gorillas also incorporate a considerable amount of fruit into their diet, which may be easier to control access to than herbaceous vegetation. Studies have shown dominance relationships to be weak in both populations. However, in the Virunga population dominance relationships were found to be stable over the long term, suggesting that they may be more important than previously thought (Robbins et al. 2005) and there is some evidence that higher-ranking females have higher reproductive success than lower-ranking ones, although whether this is the result of a more favourable energy balance is unknown (Robbins et al. 2007; 2011).

In order to better understand feeding competition in this species, we set out to measure its energetic consequences in a group of Bwindi mountain gorillas and explore the manner in which females compete for food. Over a one-year period, we collected detailed feeding observations on 6 adult females from the Kyagurilo group of mountain gorillas in Bwindi Impenetrable National Park, Uganda. We conducted nutritional analysis of the major food items for protein, lipids, carbohydrates and fiber, the macronutrients which are broken down into energy during digestion. Using human digestion coefficients (i.e., the number of calories humans are able to obtain for each gram of macronutrient) we calculated energy intake rates (the amount of energy gained by the gorillas during feeding) and estimated energy expenditure (the amount of energy used by the gorillas during three main activities: resting, feeding and travelling). We also collected data on aggressive events and recorded the number of adult females in close proximity to the target female (neighbours), to examine whether lower-ranking females avoided spending time near higher-ranking ones.

In conclusion, the study shows that in Bwindi mountain gorillas, higher-ranking females enjoyed greater access to resources resulting in a more favourable energy balance. This relationship was not the result of controlling access to fruit resources by higher-ranking females. However, feeding on fruit did provide more energy for the group as a whole than other foods, a finding which has been replicated in a number of other primate species. The results of the study indicate that the energy cost of feeding competition in this population is greater for lower-ranking females than for higher-ranking ones. This is an interesting finding for mountain gorillas, as at first glance these gorillas appear to feed on food resources which are difficult to control access to.

The results highlight how even in species in which dominance relationships appear to be weak, some individuals do better at the expense of others, suggesting that the strength of dominance relationships may not always predict energetic inequalities. The differential costs of group living may help explain variation in reproductive success in Bwindi gorillas and other species. Moreover, aggression is not a prerequisite for unequal costs of group living as avoidance alone can also produce the same results. This subtle form of competition has received much less attention in the literature, despite producing similar results to more direct forms of aggression. Accordingly, future studies should place greater emphasis on this competitive strategy.

We would like to thank the Uganda Wildlife Authority, the Uganda National Council for Science and Technology, the Institute for Tropical Forest Conservation and the Max Planck Society. A special thank you to all the field assistants who participated in this project.