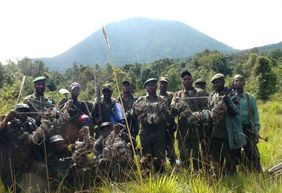 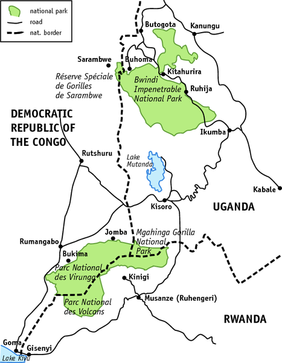 From early 2007, security in mountain gorilla habitats has been highly volatile due to the long-lasting war in the eastern Democratic Republic of the Congo, which has disrupted peace in the entire region. As a result of the ongoing conflict, the Mikeno Sector, home to the mountain gorilla in the Virunga National Park, has been insecure since January 2007. Within a period of only 7 months, from January to July 2007, 10 mountain gorillas were killed as a result of the conflict. An additional 2 gorillas are missing, one infant was orphaned but is still with its family, and 2 orphaned infants are under the care of the ICCN and the Mountain Gorilla Veterinary Project (MGVP) in Goma.

In July 2007, Berggorilla & Regenwald Direkthilfe (B&RD) stepped forward to address this wildlife conservation crisis by providing an initial emergency grant of US$ 25,300 to support the work of the International Gorilla Conservation Programme (IGCP) as it attempts to deal with these clear and immediate threats to the preservation of the mountain gorilla. Additional support from B&RD was then received to continue to provide assistance to ICCN (through IGCP) during the emergency period and for funding to ICCN to resume activities once the emergency situation was over, and also to help to mitigate human-gorilla conflicts in the region. We are extremely grateful to B&RD for their timely and generous support. In this report, we summarize the status of the work the IGCP has done to date with the assistance of B&RD.

Patrol Post Construction: Sarambwe Patrol Post
A priority need identified by ICCN was the construction/rehabilitation of patrol posts in the Mikeno Sector following improvement of the security situation and once the ICCN rangers were redeployed back to the park. However, as the conflict there continued, making it impossible to redeploy rangers to the patrol posts, a request was made to B&RD to instead construct a patrol post in the Sarambwe Reserve, Congo (adjacent to the Bwindi Impenetrable National Park).
This activity has been identified as a priority in order to better coordinate conservation activities in the reserve and ensure the protection of the Rushegura group of habituated gorillas (from Bwindi) who are spending increasing amounts of time there. Construction of a ranger outpost is one of the most effective conservation strategies to allow for monitoring of the gorillas and activities in the reserve as it helps ensure that there is a permanent ranger presence in the area.
This activity was delayed slightly as there has recently been some confusion about the legal status of Sarambwe. In the end, Sarambwe now has the status of Forest Reserve, and IGCP and ICCN can move ahead with the patrol post construction. We are now working with the infrastructure unit of ICCN to identify a contractor, and it is hoped that the contract will be signed by mid-May 2009 and then construction will begin.
A meeting is also planned for Monday 27th April 2009 at Sarambwe involving local stakeholders, ICCN Virunga National Park, and also Bwindi Mgahinga Conservation Area managers to begin discussions on the conservation status of Sarambwe, and the possibility of putting in place a management plan for Sarambwe. As Rushegura group from Bwindi is now spending considerable amounts of time in Sarambwe it is timely to begin discussions on Sarambwe's conservation status and management.

Ranger Uniforms
With respect to the uniforms for the ICCN rangers, IGCP DRC delayed purchasing anything until they could be certain of the need on the ground and to coordinate with the other NGOs who are providing equipment to prevent duplication (e.g. the uniforms that Wildlife Direct provide go to staff for the entire Virunga National Park and are not necessarily being distributed to the rangers in Mikeno Sector).
Once the need was established for uniforms in Mikeno Sector, IGCP DRC went ahead and arranged to purchase the fabric and have uniforms made up. Unfortunately on completion the uniforms were seized by Internal Security, and to date IGCP and ICCN are involved in discussions to have them released to ICCN. This dispute has now been referred to Kinshasa where it is hoped it will be resolved.

Patrols
Now that the security situation has improved, and with support from B&RD, coordinated patrols have recommenced between ICCN and ORTPN (in the areas between Mt Karisimbi and Mt Mikeno and Mt Sabyinyo and Mt Visoke); these are the first coordinated patrols that have been undertaken since September 2006, indicating that the security situation is indeed better and that normal park activities are resuming. The ICCN rangers have now also resumed their normal patrols in the Mikeno sector and Sarambwe, where local hunters had taken advantage of the absence of rangers to lay large numbers of wire snares. In one such patrol in the month of January more than 500 snares were removed from around Mikeno.
One 5-day coordinated patrol was also conducted between Virunga National Park and Mgahinga Gorilla National Park, which resulted in the uprooting of 16 snares on the Uganda side and 10 on the Congolese side. At the end of March 2009 another 5-day coordinated patrol was conducted between the Mgahinga and the Volcano National Park (Rwanda).
Support is also being given to regular ranger-based monitoring patrols in Bwindi. The coordinated monitoring of Rushegura group aims at ensuring the good health of the gorillas. Results from this monitoring indicate that the gorillas are in good health; as the ICCN rangers in Sarambwe do not know the individual gorillas, plans are underway to have Bwindi rangers join them to train them in the identification of the individuals and carry out joint monitoring.

HuGo - Equipment and Training
Support from B&RD for HuGo activities in Rwanda and Uganda is targeting the equipment and training needs of the HuGo members. Although currently this funding has not been utilized, activities are planned that will fully expend these funds before June 30th 2009. In Rwanda this includes purchasing field equipment (GPS units, gumboots and rain jackets) for the ANICO (Animateur de Conservation) who are monitoring the gorillas when they come outside the park. ANICO will also undergo training; topics include gorilla behaviour, chasing methods, mechanisms of disease transmission, gorilla awareness, and buffer zone management.
In Uganda, a training needs assessment for the HuGo members was undertaken to develop a training plan. An equipment needs assessment was also undertaken to procure equipment before June 30th 2009. Both these assessments will guide IGCP Uganda in its use of B&RD funds for HuGo support with training and equipment. Another activity (although not funded through B&RD) was to provide incentives to the volunteer spirit among the HuGo; credit associations were established to assist members to access savings and credit services. An evaluation of the health of these associations was conducted to link them to bigger credit institutions.

Conclusion
Currently the security situation in eastern Congo continues to improve, and as a result planned efforts to provide stability to the mountain gorilla conservation scenario in Mikeno sector of Virunga National Park are ongoing. Law enforcement patrols are now operating regularly as are the monitoring patrols for the habituated groups of gorillas. Additionally the HuGo programme continues to operate in communities bordering the parks with the aim of mitigating potential human-gorilla conflicts. IGCP continues to look forward to longer lasting peace while we remain vigilant in our gorilla conservation efforts and supportive of our partners and local communities.
The International Gorilla Conservation Programme would like to extend thanks to Berggorilla & Regenwald Direkthilfe for giving us this much-needed financial support for the protection of the mountain gorilla and its critical afro-montane forest habitat.