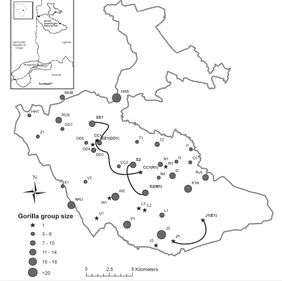 Map of the Bwindi Impenetrable National Park with the locations of gorilla groups found during the census. Stars denote lone silverbacks whereas circles represent groups. The size of the circle corresponds to group size. Each group and lone silverback is labeled with a unique identifier tag. Groups and silverbacks that were double-counted during the census are shown in bold and connected by a line. (© reprinted with permission from Elsevier) 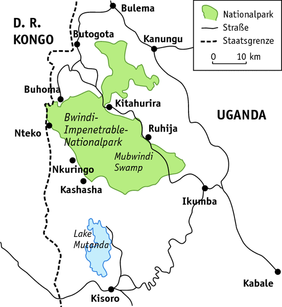 Accurate population size estimates are an essential part of every effective management plan for conserving endangered species. Censusing rare and elusive wild animals that live in habitats where it is difficult to make direct observations, as is the case for mountain gorillas, is challenging and often relies on counting indirect signs, such as nests or feces. While in the Virunga Volcanoes approximately 71% of the gorillas live in habituated groups and can be directly counted, a much smaller proportion (approximately 25%) of the Bwindi gorillas is habituated and can be directly observed and counted.

For mountain gorillas, the relatively small size of the protected areas (Virungas: 450 km²; Bwindi: 331 km²) and the ability to easily find nest sites and trails left by individuals moving through the forest led researchers to devise a "complete sweep" census method. In this approach, several closely-spaced teams systematically search the entire forest for gorilla trails and nesting sites (Aveling & Harcourt 1984; McNeilage et al. 2001; 2006; Sholley 1991; Weber & Vedder 1983).
Most gorillas live in social groups and all weaned individuals construct a nest each night. These nests are cohesively distributed at the group's nesting site and each individual typically defecates in or next to the nest before leaving the site in the morning.
During a census, teams consisting of trackers, rangers, and researchers record the location and number of nests at each nest site and the size of the associated dung, which corresponds to the size of the gorilla, for up to three consecutive nest sites per gorilla group. This information is used to infer the direction in which the group is moving, the number of gorillas and the sex/age composition of social groups at the site, as well as the number of groups and gorillas in total. A key aspect of the complete sweep method is that it assumes that signs of essentially all population members can be detected and that each individual is counted only once. However, the accuracy of the assumptions of the indirect complete sweep census method for gorillas has never been systematically evaluated.
Using the complete sweep census method, two censuses of the Bwindi gorillas were carried out in 1997 and 2002 and suggested a 1% annual growth rate from 300 gorillas in 1997 to 320 gorillas in 2002 (McNeilage et al. 2001; 2006). The intensity of the effort expended to encounter gorilla signs across the small park suggests that it is unlikely that the complete sweep census produces a substantial undercount; of greater concern is the possibility of double counting gorillas. This can happen if individuals build more than one nest per night or social groups are double-counted. Both situations will violate the underlying assumption of the sweep census and inflate the population size estimate.
To assess the conservation status of the Bwindi gorilla population, in 2006 we carried out a genetic census in parallel with the traditional, nest-count based census of this population. In addition to counting nests at the nest site, we also collected fecal samples for genetic analysis. More than 700 fecal samples were collected, of which more than 400 were genotyped with the aim to derive an individual genetic profile for each individual in Bwindi. Population size estimates derived solely from nest counts were then compared to those derived from a combination of nest counts and genetic information.

Population Size Estimates
The nest-count based census inferred a total of 30 groups and 11 lone silverbacks, for a total count of 336 individuals after correcting for missed infants. Infant dung is often hard to find in the nest and therefore it is assumed that only 2/3 of the infants are found during the census. This population size estimate represents a 5% increase from the 2002 census estimate of 320 gorillas (McNeilage et al. 2006). By using the same field data and incorporating genetic information, however, we inferred the presence of only 28 groups and 10 lone silverbacks, comprising a total of 302 individuals, after correcting for missed infants and adults. The comparison between the nest-count based (336) and the genetic census results (302) reveals that the counts of Bwindi mountain gorillas differed by 34 individuals, or 10.1%.

Sources of Error
The main discrepancy in the number of gorillas between the nest-count based and the genetic population size estimate was the double-counting of groups, inflating the nest-count based estimate. Although the complete sweep census minimizes the chance of group double-counting by progressing in a fast and systematic way across the forest and by comparing the size, composition and temporal and spatial distribution of gorilla groups, double-counting groups is still possible and the likelihood of this happening cannot be adequately addressed by this method. Only by providing individual identifiers, such as genotypes, is it possible to assess whether groups have been double-counted or, alternatively, groups that are different were considered to be the same. The second greatest source of error in the number of gorillas was double-nesting of individuals, and this again inflated the nest-count based population size estimate. The nest-count based census assumes that each individual constructs a single nest; but on several occasions we found that individuals constructed and defecated in multiple nests, or dung from the same infant was present in more than one nest. Like the case of group double-counting, the nest-count based census method has no means to account for this bias and individual identifiers in form of genotypes are needed to tackle the problem. The complete sweep method produces a count of individuals and it is not possible to infer confidence intervals around the total population size estimate. Since the genetic analysis uses fecal samples collected during the complete sweep, no confidence intervals can be calculated for this method either.

This article is a summary of Guschanski et al. (2009). We thank UWA and Uganda National Council for Science and Technology for cooperating with us while carrying out the field research in Bwindi. The census would not have been possible without the exceptional collaborative contribution and financial support of a large number of people and organizations, including UWA, ORTPN, ICCN, USAID PRIME West Project, WCS, IGCP, ITFC, John D. and Catherine T. MacArthur Foundation, WWF, B&RD, Karisoke Research Centre, the National Geographic Society and the MPI for Evolutionary Anthropology. We thank the following for their efforts as team leaders: A. Basabose, J. Byamukama, S. Sawyer, N. Parker, Tibenda Emmanuel, and the late Safari Crispin. Des Amany and Clemensia M. Kankwasa provided superb logistical support. We are particularly grateful to all the team members and support staff who worked with genuine commitment under harsh conditions. KG thanks Gervase Tumwebase for his support and advice throughout the field work. The Max Planck Society provided funding for the laboratory part of this project. We thank D. Lucas, O. Thalmann, M. Arandjelovic, G. Schubert, A. Abraham, H. Siedel, S. Hinrich, H. Kühl, S. Geidel, J. Ganas, and T. Breuer for assistance in the lab, with the analyses and for helpful discussions.