The Status of Grauer's Gorilla in the Usala Forest 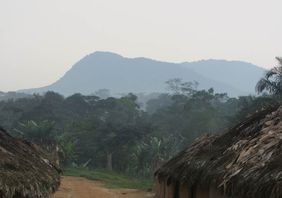 The Usala forest sits at the heart of the 30,000 km² Maiko Tayna region of eastern Democratic Republic of the Congo, and is among the most intact, remote, roadless and inaccessible expanses of tropical rainforest remaining on the African continent. Situated between the Maiko National Park to the west and north, the Tayna and Kisimba-Ikoba natural reserves to the east and bordered by chain of rugged mountains to the south the Usala forest remains largely unexplored.

Like much of the Maiko Tayna region, historical records of gorillas in Usala are sparse. In 1935 a single adult male skull was collected by Belgian mine prospectors near Kilimamesa and deposited in the Tervuren Museum, Brussels. Although they did not visit Usala itself during their pioneering surveys of eastern gorillas in 1959, John Emlen and George Schaller (1960 supplementary notes) provide anecdotal reports of gorillas in Usala, stating that gorillas were perceived locally as "Common" on both sides of the Lindi River.

Later in the 1990s a range wide assessment of Grauer's gorilla conducted by Jefferson Hall and colleagues (1998a) largely omitted Usala and the forest east of Maiko National Park (including the Tayna and Kisimba regions) from their analysis due to a lack of knowledge about the area.

In 2003, communities from the villages of Rama and Kongomani, in the far east of Usala contacted the Dian Fossey Gorilla Fund International (DFGFI) and UGADEC (Union of Community Based Gorilla Conservation Associations in East Congo) with reports of the continued existence of gorillas west of the river Lindi and south of Rama towards Walikale. Between 2003 and 2007 with some small support from DFGFI and UGADEC, community members from these villages were able to collect limited but highly important data on the presence of gorillas in this region. This initial data also revealed the presence of other important flagships for eastern DRC, notably the elusive okapi and Congo peafowl, eastern chimpanzees and forest elephants.

However, it was not until April 2007 that the first attempt to assess the status of Usala's wildlife was made by DFGFI (Nixon et al 2007) with the Rama and Kongomani communities. Funded with support from USAID, the Columbus Zoo and Busch Gardens these reconnaissance surveys walked 240 km over an area of approximately 850 km² revealing a sparse but locally concentrated gorilla population over an area of 340 km² between the Tamaria and Lindi Rivers. During the survey 34 fresh and recent gorilla nest sites were recorded and some relatively large gorilla groups were encountered (up to 24 individuals). Although no precise abundance estimates could be calculated from this survey, a highly tentative estimate of 240-410 weaned gorillas was given for the survey site by converting recce encounter rates (fresh nest sites/km) into expected transect encounter rates following Hall et al. (1998b). In addition, the survey revealed relatively low levels of armed hunting (hunting was limited primarily to snares) and active artisanal mining compared to other forests in the region. Given these positive results recommendations were made to provide further support for the Usala communities to safeguard their highly important wildlife.

Based on a number of factors including the remoteness of the site this support did not arrive for the Usala communities but in the 2012 IUCN Conservation Action for Great Apes in eastern DRC (Maldonado et al. 2012). Usala was put forward and recognised by the participating stakeholders as a priority region for the conservation of great apes.

A primary recommendation emerging from the 2012 action plan workshop was the urgent need for fieldwork to establish the current range wide status of Grauer’s gorilla, and to identify priority populations on which to focus conservation action. Further engagement with communities was also prioritized, although it was agreed that such activities must be targeted around the highest priority ape populations. Thus, a thorough field assessment of gorilla populations within historically important regions of their range was recommended as a priority for both landscape- and site level conservation planning.

As part of the implementation of the recommended CAP activities and with financial support from the ARCUS foundation, FFI initiated a status assessment of great apes in the Usala forest in September 2013, starting with initial meetings with communities in the village of Rama. During these largely successful consultations the team was welcomed by the community, however, they strongly expressed their frustration at the lack of support provided since 2007. Despite this, the community remained keen to engage with the FFI team and share information on gorilla presence and threats. The community members who attended these meetings reported gorillas were still present south of Rama and in the south west towards the river Oso, however they also reported sporadic hunting of forest elephant, okapi and apes by armed groups, including an entire group of 9 gorillas shot in the region of Kilimamesa in 2012. Following these meeting plans were made with the communities for the FFI team to return in spring 2014 to carry out participatory surveys.

In March 2014 the FFI survey project team made their way to Mohangha, meeting with Usala inhabitants and organising porters to transport 100 kg of equipment and over 250 kg of ration 150 km by foot to Rama, a logistical challenge of epic proportions! After arriving in Rama 5 days later, the team along with traditional leaders from Rama visited the villages of Baraza and Mbekini informing them of the planned surveys, recruiting trackers and porters and sensitizing them about great ape conservation issues.

Following this two teams entered the forests conducting a total of 42 days of field work in the forest south of Rama, walking approximately 200 km of guided reconnaissance walks across the zone of gorilla distribution identified in 2007. These surveys revealed that western Usala forest still supports a significant gorilla population, with teams observing a total of 28 fresh/recent nest sites. Average gorilla nest group size was also highly similar to 2007. These results suggest, despite a complete lack of active protection or protected areas status, that this important population has remained relatively stable during the past 7 years. Our results also reveal relatively low levels of armed hunting, mining and forest settlements all highly similar to 2007. This is remarkable in the current DRC context especially when surveys in other priority regions have recorded precipitous declines and local extinctions (Nixon et al. 2010, Hart et al. 2009). It is almost certain that the apparent stability of this gorilla population is a function of its remoteness from roads, navigable rivers, large villages and towns. While the inaccessibility of Usala presents a serious logistical challenge to the implementation of conservation activities, it also offers great potential for the long term protection of its gorillas and other wildlife.

Despite these promising results there is no time for complacency. Increasing land pressure and insecurity to the east is resulting in large scale displacement and resettlement along the entire western Albertine rift escarpment. The Rama communities expressed that the threat of new and uncontrolled settlement in this area was a principal concern about their future. The Rama community suffers extreme poverty, living in almost complete isolation and relying on shifting agriculture, subsistence hunting, low level artisanal mining and the transport of commercial materials from Mohangha to Oninga (a major mining settlement approx. 75 km west of Rama) as principal sources of income. Affordable alternatives to bushmeat are scarce and access to medical care and education are practically non-existent. Current human population densities along the Albertine Rift region of eastern DRC are among the highest on the entire continent and land shortages continue to be a major source of conflict. As security improves, immigration and settlement in the forests of eastern Congo is predicted to rise substantially over the next few decades. This predicted expansion should be taken as a serious warning that the Usala forest will become increasingly threatened over the coming years and its gorilla populations should not be considered safe from extirpation.

Unfortunately since August 2014 security has deteriorated considerably south and west of Rama severing foot access to the region and as a consequence FFI has been unable to re-visit Usala to continue its planned participatory surveys. However, the team has remained in continual remote communication with the Usala communities and is working closely with its partners, The Jane Goodall Institute DRC and UGADEC, to develop a holistic strategy for the conservation of Usala as security improves. Chester Zoo, UK is also providing technical support and input towards this strategy. Further engagement with the Usala communities to improve basic environmental and health education, develop realistic alternatives to bushmeat dependency, establish community based wildlife monitoring programs, and identify appropriate incentives for the conservation of the Usala forest will be essential in protecting this highly important gorilla population in the future.