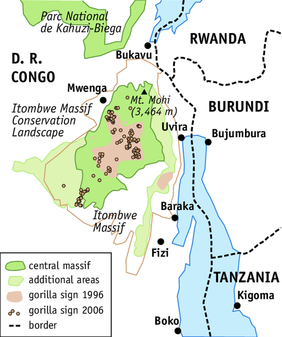 The Wildlife Conservation Society (WCS) has been undertaking biological inventories in the Itombwe Massif since 1995. This area holds the largest and most remote block of intact montane forest in Africa. The entire massif, an area of about 12,000 km², includes an unbroken block of forest; the central massif, of about 6,500 km², ranges up to 3,700 m in elevation.
Its unique range of habitats includes various highland forest formations, bamboo, moorland heath, miombo-moist forest transitions, and a high elevation forest savanna ecotone. It contains important populations of both the eastern chimpanzees (Pan troglodytes schweinfurthii or marungensis) and the endangered Grauer's gorilla (Gorilla beringei graueri).
The Itombwe Massif represents one of the most significant remaining new areas for the conservation of the Democratic Republic of the Congo's great apes and the endemic biodiversity of the Albertine Rift. A properly gazetted and managed protected area, encompassing the massif and surrounding ecotones, is one of the most important conservation priorities for Congo.
In 2006, WCS teams discovered two new sub-populations of gorillas that were not identified in the 1996 surveys of the massif. These include some in the south west and some in the north of the central massif. These data need to be assessed in relation to the survey routes because not all areas of the central massif have been visited. Interestingly gorillas are sighted quite close to human habitation despite the fact that they are hunted by people for meat.

Conservation
Though it is remote, the Itombwe Massif is confronted by a number of threats, including mining, artisanal logging, wild fires, a major increase in hunting, and pressure from human populations that are converting the forest for agriculture and pastures. A decade of conflict has led to wide availability of arms and ammunition, and some areas remain under the control of small bands of rebels.
These threats are growing and, combined, these pressures are threatening the biological integrity of the massif and critical populations of chimpanzees and gorillas. In addition, these threats have contributed to the fragmentation of the great apes' habitats, with the gorilla the most affected and its very existence seriously compromised. Studies conducted by WCS teams in 2006, although not covering the entire massif, have recorded a dramatic decrease in the number of gorilla populations compared to 1996 surveys. Conservation of the massif and its great apes must happen quickly before these biological treasures are compromised or lost.
A large number of people live in the central massif of Itombwe. If we estimate about 6 people per household then there are about 31,530 people in the houses we have identified from the aerial photography and therefore about 5.4 people per km² in the region. Therefore, any planning for conservation of this region needs to incorporate some form of zoning that would include the needs of the local people as well as the conservation of the incredible biodiversity found here.
The presence of the large number of people in the massif is having an impact on the wildlife of the massif, particularly the large mammals and birds. The ornithological team reported that it was very surprising how few large birds were observed when compared with other forests they have surveyed in the Albertine Rift region. Snaring in particular was common. The field teams were regularly offered bushmeat, including primate meat, while in the massif and it was clear that near villages large mammals were very scarce. If large mammals are to survive in the massif then there is a need to create relatively large areas that are isolated from human hunting and these areas may need to be linked by corridors to maintain viable populations.
In September 2006, partly as a result of these surveys, the Ministry of Environment gazetted the Reserve Naturelle de l'Itombwe (RNI). However, this was done very rapidly without any consultations with the local communities, and led to much friction between them and ICCN (Institut Congolais pour la Conservation de la Nature) as a result. There are also no clear boundaries in the gazettement document, only an indication of the area where the reserve should be established. There was a need for further surveys to help establish where the boundaries should be drawn, in particular in the two sectors with potentially very important great ape populations - North Ulindi and West Mwana. Finally, participation of the local communities in the RNI area has to move beyond the initial contacts and discussion of the past decade to their real participation in the protection of the massif and its apes.
WCS is now working with ICCN, WWF and the Rainforest Foundation to consult with the local communities and develop a participatory zoning of the reserve that would establish core protection zones with buffer areas and corridors where forest resources could be harvested but no hunting would take place, and also development zones where support for infrastructure development, health and education amongst other things could help support the local population.