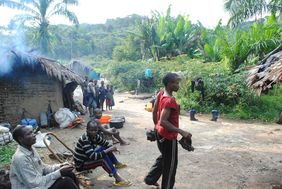 A poacher camp in the Kahuzi-Biega National Park (© ICCN) 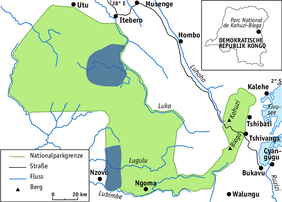 The Kahuzi-Biega National Park with the surveyed areas (dark) (© adapted from maps by Radar Nishuli, ICCN, by Angela Meder)

The Kahuzi-Biega National Park (KBNP) has been a UNESCO World Heritage Site since 1980. Since 1997, it has been on the list of World Heritage Sites in Danger. To ensure that efforts are made to return endangered sites to their original status, UNESCO recommends certain actions, the so-called corrective measures, to the countries within which the sites fall. The KBNP is currently responding to corrective measures on behalf of and with the full support of the Government of the Democratic Republic of the Congo.

Among the corrective measures suggested by UNESCO to remove the KBNP from the list of World Heritage Sites in danger is an inventory of the main wild animal populations in the low-altitude sectors of the park. This needs to be carried out as soon as possible to permit an evaluation of the state of universal value of the park and the establishment of a timetable for its rehabilitation.

To date, only the high-altitude sector of the park has been surveyed due to long-standing insecurity in the low-altitude part. Now that security is slowly being re-established in this part, the park has commenced the required surveys. Two sectors, Nzovu and Itebero, were visited by survey teams during the last two quarters of 2013.

This important work was carried out by specialist field staff from the KBNP and WCS, and supported financially by WCS and the ARCUS Foundation. The surveys lasted 68 days: 31 in Itebero and 37 in Nzovu. The aims of the surveys were to:

The team was subdivided into two sub-teams to optimize efficiency on the ground. Observations were made at a total of 661 geographical coordinates. The team used the "occupancy" method, which is still in its trial phase. The technique involves the collection of data on the diagonal of the quadrant surveyed: recent gorilla tracks found on the diagonal are followed to record 3 different nest sites for the tracked group. At each site, the team counted the total number of nests and measured the diameter of gorilla droppings for each nest in order to estimate the sex and the age of the individuals. In addition, the team used the "distance" method of transect surveys to estimate population size.

Observations of animals: The team found 5 recent nest sites, 12 sites with dry nests and one old site. They also observed 3 eastern lowland gorillas in the study area. The average size of the nest groups varied between 1 and 4.5, with a maximum number of 11 individuals. Chimpanzees are also present in the study area: 15 nesting sites were recorded. Other primate species were also observed directly or indirectly; among them were blue monkey (Cercopithecus mitis), red-tailed monkey (C. ascanius), Dent’s mona (C. denti) and owl-faced monkey (C. hamlyni).

Human activities: The war has been going on for too long in these sectors and has prevented the rangers from operating properly. During the period of insecurity a number of villages have become established inside the park. The survey teams visited five of them. The main activity of the villagers is poaching.

Access to Itebero remains an enormous problem both for patrols and survey teams. Equipment and bushmeat is transported by motorcycle, which is a very costly form of transportation.

Nzovu: The survey team covered 7 transects of 3 km each, 21 km in total, in the forest area between the town of Nzovu and Katusi village, and one diagonal of 7 km in a single quadrant. It had also been planned to visit the Luyuyu Swiza zone, but because of the insecurity created by two armed groups in conflict with each other, this was not possible.

Observations of animals: Only 4 nest sites were found for the eastern lowland gorilla, 3 were recent and one was old. The average size of the nest groups was between 1 and 4.6 with a maximum of 8 individuals. The droppings of a baby gorilla were found. 17 chimpanzee nests confirmed the presence of this primate.

Human activities: Signs of human activity are present throughout Nzovu. Signs of certain activities, such as the cutting of firewood with machetes, were found so frequently that they were not recorded. Signs that were recorded were trails made by people (10), traps (100), poachers’ camps (9), miners’ sites (7) and 12-calibre cartridges (11). The traps were dismantled and the camps were destroyed; talks were held with poachers encountered during the survey to explain the role of the park.

A total of 123 amphibians and reptiles were collected (46 at Itebero and 77 at Nzovu).

In both sites, the continued presence of apes was confirmed. A wider survey is planned for 2014 in order to provide monitoring data on the park’s overall conservation goals. We are still waiting for the results of the detailed data analysis which is being carried out by WCS in the USA.

We are very grateful to our team on the ground, namely Guillain Mitamba, Raymond Tokunda, Teddy Kalikunguba and the Itebero and Nzovu communities who joined the ICCN team to make these surveys possible.