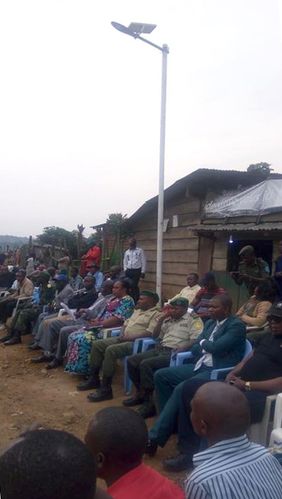 One of the street lights during the ceremony (© ICCN RNI)

The Democratic Republic of the Congo teems with important natural and biological resources. As they are so important for growth, development, the fight against poverty and climate regulation, strategies and effective rules for the conservation of these resources need to be put in place.

In fact, nature conservation was regulated long ago through Decree no. 69-041 of 22 August 1969. However, the implementation of this law turned out to be difficult as appropriate implementation measures had not been planned which would take into consideration new challenges to sustainable development. Key among these is the fight against poverty of populations adjacent to protected areas but not actively participating in the management of these protected areas, and thus not deriving legitimate advantages and benefits from them.

Furthermore, the legislation had nothing to say concerning the responsibilities of neighbouring populations - and indeed of all the stakeholders, both public and private - to participate in the planning process, nor in regard to national policies to implement conservation and sustainable use of biodiversity, and neither did it say anything about the practical modalities of the consultation process.

In fact, Decree no. 69-041, of 22 August 1969, was unsuitable as nature conservation legislation. A new Decree, no. 014/003, of 11 February 2014, on nature conservation, combined with the ICCN's (Congolese Institute for Nature Conservation) national strategy for community conservation, have brought about several major innovations, among them APA (Areas of Indigenous Heritage) which benefit local communities.

The managers of Itombwe Nature Reserve (INR) in partnership with the organisation "les SAGES" and with financial support from their partner Berggorilla & Regenwald Direkthilfe were pleased to be able to finance and implement an electrification project in selected public places in important centres adjacent to the INR. Putting theory into practice, the first electrification phase was launched by the Mwenga Territory Administrator on 12 January 2018 in the presence of all the relevant state services and tribal chiefs, in front of a crowd that was happy to receive this gift from the ICCN/IRN and its partner organisation Berggorilla. This is an innovative project for Mwenga Centre.

This report gives an account of the ceremony for the launch of the pilot project for public electrification and its official presentation to the population and the completion of the first phase. Six electricity poles have been installed in a parking place in Mwenga Centre. The street lighting will benefit the population of Mwenga Centre. The activity was implemented as part of the community conservation programme.

The public ceremony, which was held on 12 January 2018, was facilitated by the local chief/community conservation officer John Baliwa. Several personalities offered a few appropriate words in front of a large crowd consisting of the local population and others who had arrived for the occasion. All the words and speeches expressed joy and satisfaction with the support given by the ICCN/IRN and its financial partner Berggorilla, which has allowed the accomplishment of this first phase of providing Mwenga Centre with electricity. Highlights of the speeches are as follows:

The Chief of Mwenga Centre could not hide his sense of achievement about these electrical installations. He offered his warmest thanks to the ICCN/IRN for the electrification, the first in the history of Mwenga, and saluted the approach of the SAGES association in supporting this initiative. He promised that the population would get involved in the sustainable conservation of the IRN.

After introducing all the association's members including all the leaders and prominent citizens of the area, his association's aims and activities, the President of the Mwenga SAGES association thanked the new IRN management team and lauded their efforts. Only two months after their arrival, they have already made the ICCN very visible. Building on the public electrification event, which has just been implemented, his association has now become involved in the sensitization of the people living adjacent to the IRN in the Mwenga Territory.

The Director of the IRN first introduced his team to the people, then explained the origin of the project. In his speech, he showed that the project originated through a meeting with SAGES. During this meeting, the association had presented a tortoise that had been found and was then put back into the forest. The association expressed its wish to collaborate with the IRN in sensitization. Within this context, the demand for public electrification was mentioned and the IRN director passed it on to Berggorilla & Regenwald Direkthilfe, whose response was favourable and who thus also needed to be thanked. In addition, he informed the audience that the street lights are a gift from the IRN in order to protect the gorillas. In this sense, if the people commit to conservation, they will benefit from the IRN.

Finally, the director of the IRN thanked the administrator of the territory, the representatives of the chiefs of Basile and Wamuzimu chieftains, the members of the security council, the partner organisations WWF and Africapacity, the priests, the doctors, the Mwenga office of the public prosecutor and the local notability for having agreed to support the IRN and for gracing the ceremony with their presence.

The partner organisation Africapacity expressed its satisfaction about such an initiative: lighting up the parking places not only helps the local people but also travellers who are passing through.

The partner organisation WWF hoped that the population will use this model initiative to become more involved in the conservation of the IRN. As far as WWF is concerned, the new IRN team should be supported in its work, as its arrival has given impetus to the WWF's community activities which have been going on in the area for a while.

The representative of the Mwami  of the Basile chieftain said it was an honour to see the main road of his area provided with electricity, which is a first.

The Mwenga Territory Administrator, after having closed the series of speeches, called on the population to protect the new installations like reasonable people. Just having light in the night will reduce insecurity. With these words, the speaker made the case that this initiative is the beginning of the development of Mwenga Centre. This initiative constitutes the first phase of electrification of the localities bordering the IRN.

After his speech, the Administrator proceeded to the official launch of the first phase of the provision of electricity by cutting a symbolic ribbon and by turning on the first pilot lamp by remote control while waiting for the time of the automatic lighting of the lamps (6.30 pm) to arrive for the other lamps to light up. At the sight of the light being turned on, the population could not hide its satisfaction - crying out and applauding when they saw a dream come true. And with this outpouring, the ceremony ended with a cocktail offered by the SAGES association.

The purchase price on the market was high, which meant that not all the material that was planned could be bought. Instead of buying 10 poles, only 6 could be bought due to budgetary constraints. Apart from these constraints and other logistical hazards, both technical and financial, it must be noted that all activities were implemented as reported above.

However, there is notable success in that we have succeeded in providing street lighting to a part of Mwenga's main road, particularly to the carpark, which is the centre of all socio-economic activities of Mwenga, and where cases of insecurity have been registered at night. The population in general - and female sellers in particular - were pleased and relieved as the public lighting guarantees them a minimum of security during their nightly sales activities. As a result, the population has promised to make the installations their own and to protect them.