Development Activities in the Vicinity of the Sarambwe Reserve 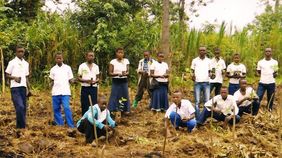 Students of Kisharu Technical Agricultural and Pedagogic Institute planting tree seedlings that they have grown in their own nursery. (© Constantin Batarira)

Activities at these two sites are often supported by partner organisations whose agendas include gorilla conservation. Without their support, the survival of the gorillas at these sites seems highly unlikely as the national authority in charge of conservation is not adapting its strategy for these sites, in spite of the special circumstances. The Gorilla Organization, which used to work at Mount Tshiaberimu with Berggorilla & Regenwald Direkthilfe (B&RD), has recently pulled out. The International Gorilla Conservation Programme (IGCP) is also no longer active in Sarambwe or Mikeno. Only B&RD is still active in the Sarambwe Reserve and on Mount Tshiaberimu. The development measures carried out in the vicinity of Sarambwe are described below.

Ongoing Activities in the Sarambwe Reserve

The Sarambwe Reserve is managed by ICCN, the Congolese Institute for Nature Conservation. This state institution has assigned one guard officer to Sarambwe, who is assisted by five park rangers. The insecurity in the area sometimes forces ICCN to withdraw all its staff from the reserve for periods of time ranging from two months to over two years, during which time the area remains without any presence of ICCN. In addition, even when ICCN staff members are at their posts, their effectiveness is reduced because they need to conduct monitoring, fight against poaching, maintain the trails in the reserve and sensitize the population. This is where Berggorilla & Regenwald Direkthilfe comes in: the organisation pays for five trackers, provides sufficient rations for the rangers on patrol, ensures the maintenance of trails and the ranger camp, assists the sensitization of the community living around the reserve, and facilitates the implementation of other donor-funded activities in the vicinity of the reserve. The trackers remain in the reserve even during times of trouble, ensuring the uninterrupted monitoring of the reserve.

Many primate species occur in the Sarambwe Reserve, among them mountain gorillas, chimpanzees, baboons, blue monkeys, red-tailed monkeys and black-and-white colobus. In addition to these primates, there are bush pigs and giant forest hogs, rodents and several bird species also living in Bwindi Impenetrable National Park. Duikers are no longer mentioned in the patrol reports. Buffaloes have disappeared.

In addition to the activities of the rangers and trackers mentioned above, development measures are being carried out in the vicinity of the Sarambwe Reserve and consist of reforestation using seedlings from tree nurseries maintained by schools and others kept by the trackers' wives. Emphasis is put on the maintenance of formerly reforested areas and their valorisation. The maintenance of reforested areas is an important contribution to carbon sequestration and is eligible for REDD+ financing.

Reforestation around the Sarambwe Reserve started in 2010. It was one of the components of the Sarambwe Reserve Integrated Management Support Project initiated by VONA (Voix de la Nature). This project was funded by B&RD and the French Committee of the IUCN. A total area of 89 ha was reforested, 65 ha under an agroforestry scheme and 24 ha as micro-reforestation with native species. Subsequent to this project, a school reforestation project was initiated in order to increase the reforested area, using seedlings from school tree nurseries. Before the project was suspended due to insurgency of armed groups, 30 ha had been reforested.

The current reforestation project consists of two components: the first deals with the maintenance of some of the older reforested areas; the second aims to increase the area of reforestation.

At Sarambwe Reserve, a passion fruit nursery, which is tended by the trackers' wives, has produced 33,723 passion fruit seedlings, of which 9,723 have already been distributed and planted. By the time the project comes to an end in June 2016, 21 ha of reforested area will have been saved. The trackers' wives' association also keeps a nursery of Eucalyptus and Grevillea seedlings. To date, this nursery has produced 50,000 plants which will allow the reforestation of 31.25 ha. Currently, 30,000 plants have been distributed. Another 20,000 are still in the nursery, about to be distributed.

Two schools, the Technical Agricultural and Pedagogic Institute and the Kisharu Primary School, also own nurseries producing tree and passion fruit seedlings. The numbers of seedlings produced will be available in May 2016, but they seem even higher than those for the nurseries of the trackers' wives.

Assuming similar production rates for all the nurseries, it will be possible to reforest 94 ha, while another 63 ha will be protected from cutting. It is expected that a minimum of about 20 families will be able to generate incomes of at least 100 US dollars per month from December 2016.