Development Activities in the Vicinity of Mount Tshiaberimu 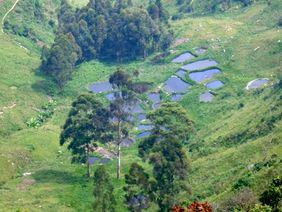 Activities at these two sites are often supported by partner organisations whose agendas include gorilla conservation. Without their support, the survival of the gorillas at these sites seems highly unlikely as the national authority in charge of conservation is not adapting its strategy for these sites, in spite of the special circumstances. The Gorilla Organization, which used to work at Mount Tshiaberimu with Berggorilla & Regenwald Direkthilfe (B&RD), has recently pulled out. The International Gorilla Conservation Programme (IGCP) is also no longer active in Sarambwe or Mikeno. Only B&RD is still active in the Sarambwe Reserve and on Mount Tshiaberimu. The development measures carried out in the vicinity of Mt. Tshiaberimu are described below.

At the moment, only one project is being implemented in the vicinity of Mount Tshiaberimu. This is a fish-farming project, where fish are raised in ponds. The objective of the project is as follows: Lake Edward is an integrated part of the Virunga National Park. Its shores follow the base of Mt. Tshiaberimu. We should remember that the population on Mt. Tshiaberimu lives on agriculture and the raising of poultry (chicken and ducks), but is little developed. Rabbits are also raised, but fish farming is still in its infancy. Frequently, there are signs that animals are being poached in the forest on Mount Tshiaberimu. Mostly using traps, the poachers target terrestrial mammals such as duikers, giant forest hogs and Gambia giant rats. However, gorillas are frequently caught in these traps.

The development of fish-farming will help to reduce the level of poaching and will be a source of income and animal protein, which is currently lacking. It will also sensitize the population concerning the conservation of gorillas and other animals in the park.

The project has the following objectives:

In July 2015, the first training was carried out in Vurusi: fifteen fish-farmers were trained from four sites (Vurusi, Kitevya, Vulambo and Kasimbi) selected for the development of fish farms. Two pilot fish ponds were selected for development for each of the latter three sites. Training was delivered before the ponds were developed in the three pilot sites.

The six ponds were created between September and November 2015; they were stocked with fry and the fish grew well and fast. A first trial capture of fry from two ponds is planned for June 2016; the fish should be ready for harvesting in September 2016.

A campaign to sensitize the population on the potential for fish farming took place in September 2015. Another campaign was carried out in January 2016. As a result, many people have been attracted to the project. Although initially only 6 fish ponds and about 15 family ponds had been planned, the population mobilized itself to construct more (at the beginning of May, they had constructed 59 family ponds). They were advised to construct diversion ponds in order to make use of the hill streams. The population worked together to dig ponds: about 10 people joined together to dig a pond for one of the group; once that was done they moved on to dig a pond for another group member, and so on until every member of the group had their own pond. Aside from the funds used for the 6 pilot ponds, the groups were supported with materials for digging and pond construction.

The current situation is as follows: